ANZ Australian Job Ads only a small decline during Omicron

ANZ Australian Job Ads1 fell 0.3 per cent in January following a downwardly revised 5.8 per cent drop in December. Despite the surge in Omicron cases, Job Ads remained 9.6 per cent above the Delta-lockdown lows. 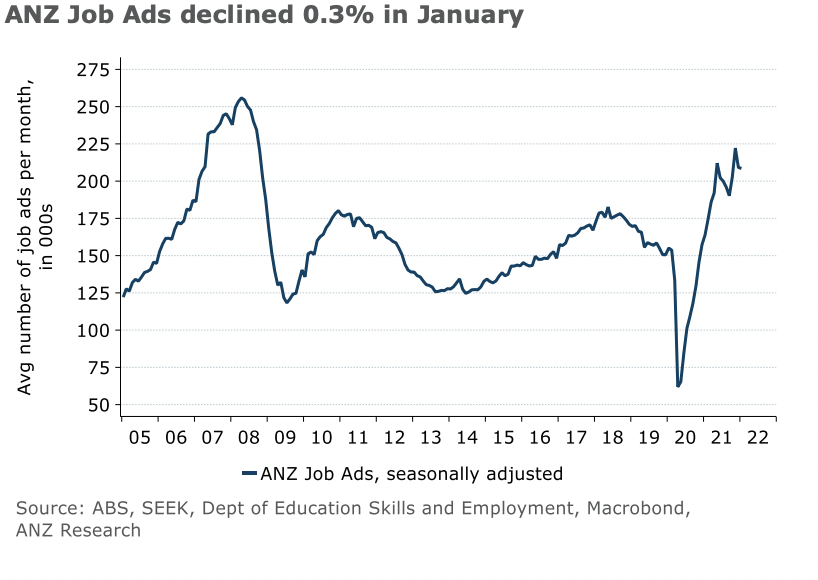 "Although ANZ Job Ads fell by 0.3 per cent in January, they rose steeply on a weekly basis through the month, as is usual following the seasonal Christmas/New Year low." ANZ Senior Economist, Catherine Birch said.

"This was despite the large number of Omicron cases in the community, reflecting the resilience in labour demand and the widespread view that Omicron would only be a temporary setback."

"After Omicron, we expect the job-switching rate to rise (discussed in our previous ANZ Job Ads report) as workers change to better, higher paying jobs in 2022. This would mean more people quitting their current jobs, which should translate into a greater number of new job ads, raising ANZ Job Ads as well as the National Skills Commission measure. So we may not have seen the peak yet."

"In December, the employment-to-population ratio hit a record high 63.3 per cent and both unemployment and underemployment dropped to the lowest rates in more than thirteen years. With the ABS job vacancy rate lifting to a fresh record high of 2.9 per cent in November, there’s even more tightening on the cards."

"It now seems that an unemployment rate with a 3-handle (and much lower underemployment) will come a lot sooner than our forecasted 2023. Our forecasts had wage growth reaching 3 per cent y/y in Q3 this year but the risks now seem weighted towards an earlier acceleration. This is one reason we now expect the RBA to start lifting the cash rate in September, reaching 2 per cent by end-2023."