A record gain in the employment figure – up 366,100 in November – was likely a significant factor behind the fall, but we can’t rule out some dampening effect from Omicron. 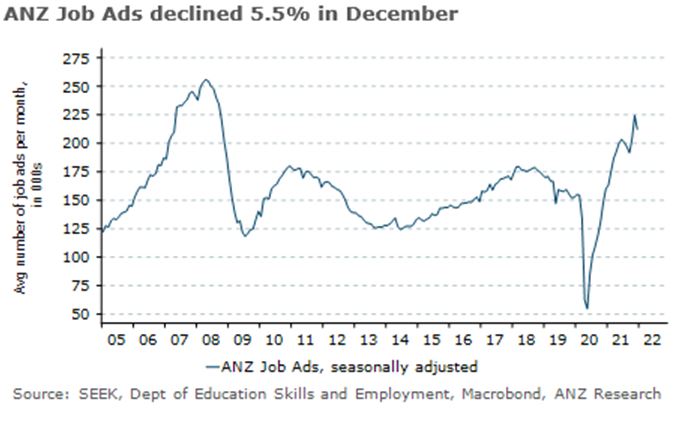 ANZ Senior Economist, Catherine Birch, commented: The 5.5% drop in ANZ Job Ads in December was not necessarily a bad sign.

But it’s also possible that businesses have become more hesitant to hire due to the spread of Omicron and the consequent uncertainty around consumer behaviour and worker availability.

ANZ-observed spending data show new year spending was well down on the previous year, particularly in NSW. Looking ahead, we expect the job-switching rate to pick up in 2022.

In November, 5.3% of workers did not expect to be with their current employer/business in 12 months’ time due to changing jobs/seeking other employment, a post-GFC high.

This may partly reflect some catch-up from people who delayed job changes during the pandemic.

But with so much competition for labour and workers feeling secure in their jobs, we should see more people moving to better jobs and asking for larger pay rises in 2022, contributing to stronger wages growth (Figure 3).