ANZ Australian Job Ads1 declined by 0.5 per cent m/m in September, following a small downward revision of the August result. But this is only 0.8 per cent below the recent peak in June. This suggests tightness in the labour market is not yet letting up, which is consistent with other indicators. 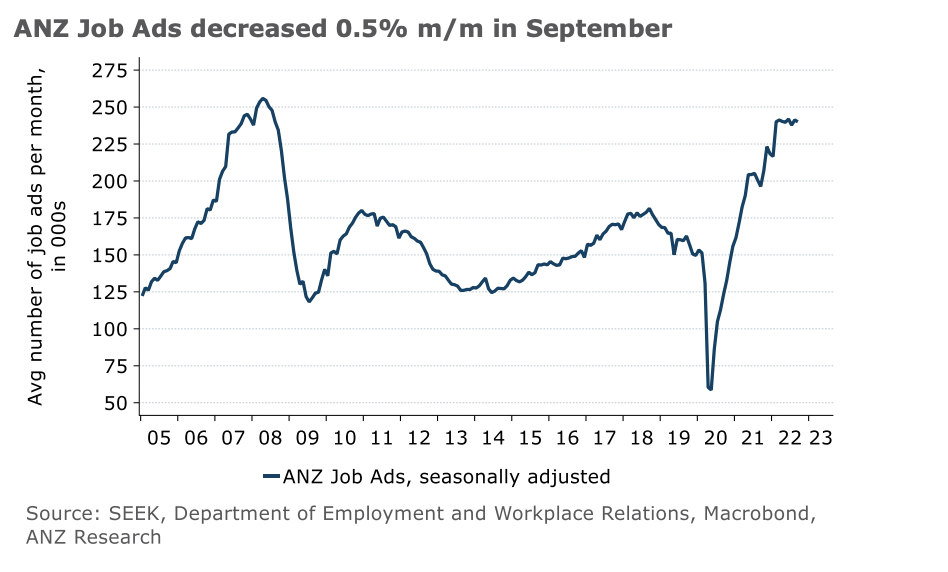 "ANZ Job Ads declined 0.5 per cent m/m in September but remained very close to its recent peak in June and 56.5 per cent above its pre-pandemic level. It shouldn’t be a surprise that ANZ Job Ads is holding up so well several months into the rate hike cycle." ANZ Senior Economist, Catherine Birch said.

"New Zealand’s job ads series, Jobs Online, is yet to turn down, despite the RBNZ commencing tightening seven months earlier than the RBA. The fact that ANZ Job Ads and other leading indicators of Australia’s labour market are still so strong suggests the RBA may have to take the cash rate further into restrictive territory than we currently expect to slow demand growth. Other indicators confirming the ongoing strength in labour demand include ABS job vacancies, which remained incredibly high in August, with a 2.1 per cent q/q fall barely making a dent. There is still almost one vacancy per unemployed person.

The National Skills Commission’s (NSC) Internet Vacancy Index, which tracks newly lodged job ads each month, hit a record high in August. The NSC’s measure of recruitment activity and NAB’s employment index both remain elevated. As such, our expectation of solid employment growth pushing unemployment below 3 per cent by early next year is unchanged. The trend data series for ANZ Job Ads has been reinstated after a suspension due to the pandemic."

ANZ Australian Job Ads it ain't over yet