ANZ Australian Job Ads it ain't over yet

ANZ Australian Job Ads increased 2.0 per cent m/m in August, exceeding the peak in March. The volume of unfilled labour demand suggests the effects of higher inflation, rising rates and global growth risks on the labour market will be lagged. The immediate actions from the Jobs and Skills Summit will likely have a marginal effect on closing the aggregate gap. 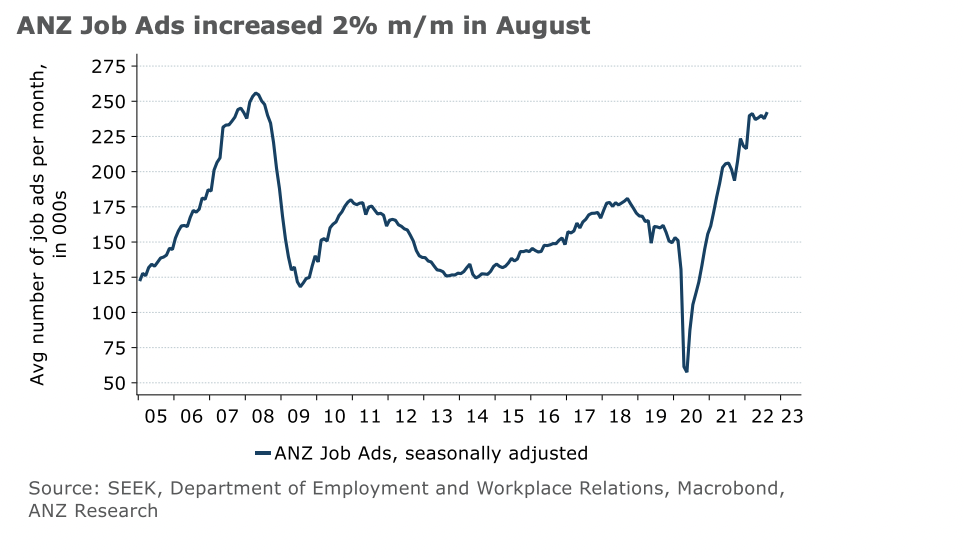 "Last month, we hypothesised that ANZ Job Ads had passed its peak, but we have been proven wrong, as it increased 2.0 per cent m/m in August, exceeding the March high. Other indicators of labour demand remain robust: NAB’s business survey showed the employment index rising sharply in July to the third-highest level since the series began in 1997." ANZ Senior Economist, Catherine Birch said.

"We think the falls in employment and participation in July’s labour force survey were temporary reversions after rapid improvements over recent months. We continue to expect solid employment growth over the remainder of the year, underpinned by the significant volume of unfilled labour demand.

Some outcomes of the Jobs and Skills Summit aim to expand the supply of labour to meet this excess demand. The net effect of the increase in the permanent migration cap by 35,000 to 195,000 in 2022-23 will depend on the share coming directly from overseas and the occupations they fill. But it doesn’t change the fact that this will add to the demand side as well as the supply side. Extending visas and relaxing work restrictions on international students and the one-off income credit so Age Pensioners can work more without losing any of their pension should lift supply at the margin. But inadequate wages and conditions, skills mismatches and lack of affordable housing could hamper the effectiveness of these measures.

Much work is still to be done on other policy areas addressed at the Summit, such as bargaining, before we can gauge their potential effect on the labour market."