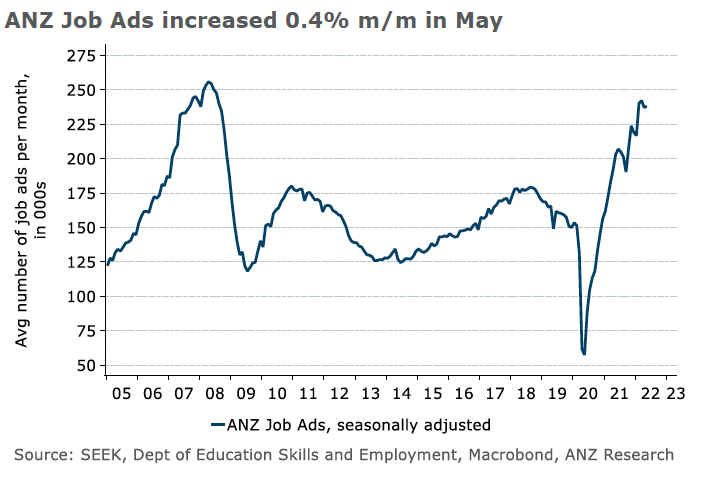 "ANZ Job Ads was virtually unchanged in May with an increase of 0.4 per cent m/m. It remains close to the March peak, indicating significant unmet demand for labour. But Australia’s labour market is not as tight as in some other economies. The US has almost two job openings for every unemployed person, while in Australia, there are still fewer job vacancies than unemployed people (0.8)." ANZ Senior Economist, Catherine Birch said

"While population growth has started to recover and the unemployment rate has dropped to a 48-year low of 3.9 per cent, there is a substantial pool of domestic labour supply that employers are still not utilising. As noted last month, long-term unemployment at 1.0 per cent still has a lot of room to fall; a quarter of all unemployed people have been out of work for a year or more. And a recent ABS report estimated that in February there were 1.25m potential workers (ie people who were not employed but wanted to work) who were not classified as unemployed.

The Q1 Wage Price Index was a bit disappointing, rising just 0.7 per cent q/q. The national accounts wage measure, non-farm average earnings per hour, was a lot more positive, up 5.2 per cent y/y in Q1, although this was somewhat inflated by the much higher number of workers taking sick leave due to COVID. The ABS’ job mobility report showed 1.3m people (9.5 per cent of employed people) changed jobs during the year ending February 2022, the highest rate in a decade.

The higher job-switching rate will continue to put upward pressure on ANZ Job Ads and is also a good sign for stronger wage growth (Figure 1). The Fair Work Commission’s upcoming minimum and award wage decision will be a key factor in how quickly wages growth accelerates in the second half of 2022."