Adam Stephen: If we got back in a time machine, if one existed, and went exactly two years back in time, we were living in fairly frightful times. You might remember, it was all pretty new this COVID-19 thing. Late one Sunday afternoon in March the Prime Minister basically put the entire country into a snap lockdown while we tried to get on top of that initial wave, and people were really wondering what impact coronavirus may have not only on their personal lives but on the broader economy. When it came to our property market, which had been running particularly hot in the capital cities for years, the thinking was at the time that the pandemic wasn’t going to be a good thing. And there were predictions from some of the big banks including ANZ that we could see property prices fall as much as ten per cent or more. But, two years on quite the opposite has happened. Working out just how sustainable these rapid rises are in regional house prices are, it’s pretty important for bankers as they get ready to navigate a looming change in the lending landscape as we expect interest rates to slowly start rising. ANZ CEO Shayne Elliott has been in Townsville today talking with locals and he’s with us this afternoon on Drive, across regional Queensland. Thank you very much for joining us, Shayne. 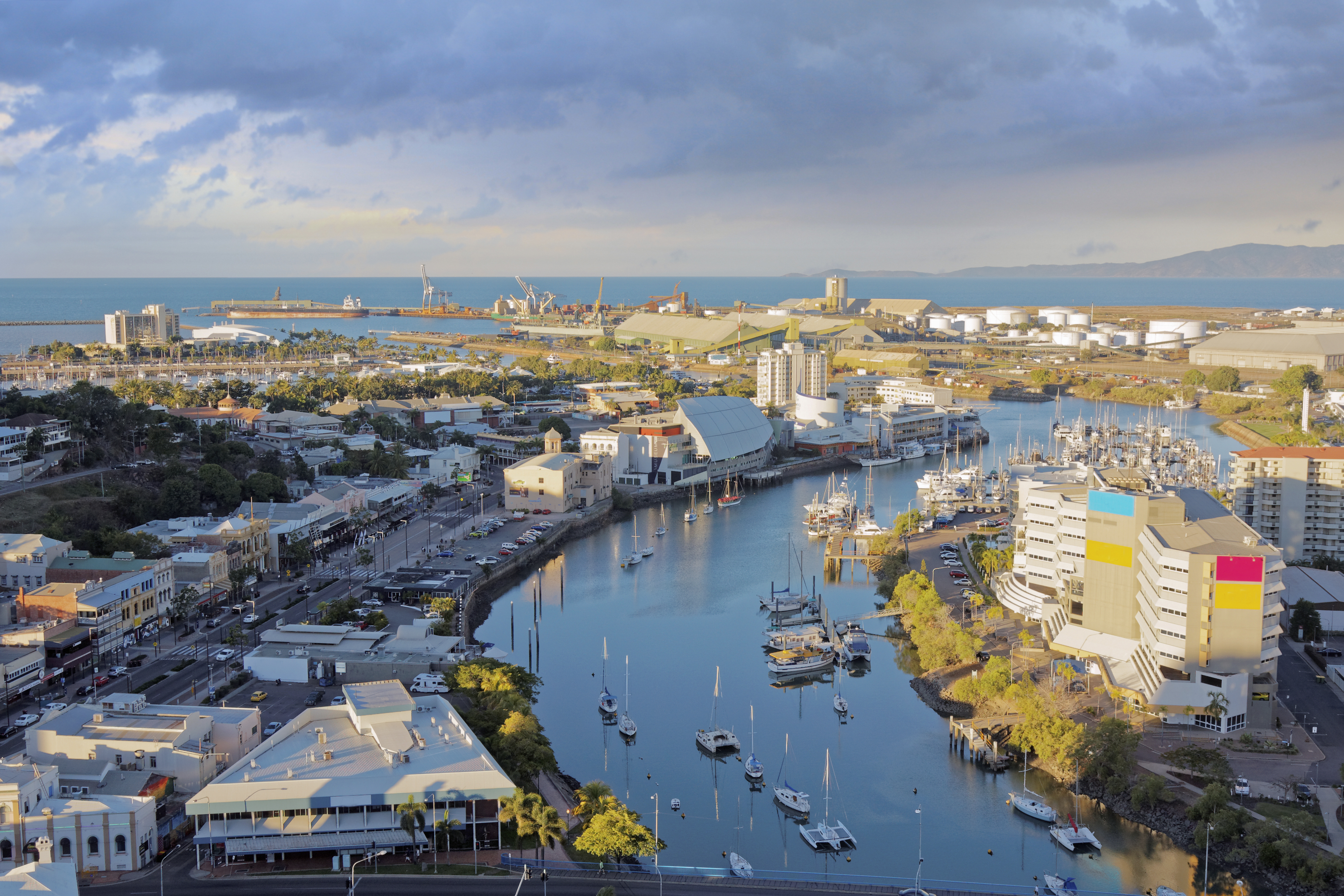 Shayne Elliott: Hey, thanks for having me.

Adam Stephen: Well we do know, and we heard earlier in the program that the resources boom that were seeing at the moment in terms of prices has meant that the economy where you are in Townsville is much stronger than it was only even a few years ago. Is that what people have been sharing with you today?

Shayne Elliott: Absolutely. I have to say, it's my first time here, so I don't have personal experience to base it on. But what everybody has been telling me is that the economy here is in rude health. Lots of opportunity and they’re grappling – small businesses and big – with many of the problems that we see across the country, shortages of labour, worrying about inflation and how that's going to affect their ability to secure supply of the various goods that they need to get onto their businesses.

Adam Stephen: One of the big talking points over the past 18 months in regional Queensland has been our property market that's gone absolutely ballistic, particularly for standalone homes. This was the opposite of what your bank and others were predicting only a couple of years ago, we were worried that things were going to go the other way. Have we worked out exactly why things didn't drop, why they didn't materialise in the way we initially expected?

Shayne Elliott: Yes, it's a great point and we did and everybody – and I heard you in the intro - yes, we thought prices might actually fall ten (per cent). Most of the banks and economists thought the same, but there was one really big thing we didn't bank on and that was that the government, Federal in particular, but also states were going to throw hundreds of billions of dollars into the economy. And that's what happened over the last few year's, $400 billion thrown into the economy and all sorts of grant programs and support and JobKeeper and JobMaker and HomeBuilder and all these things.

And that money basically finds a home and what people did with it is they paid off their debt, and they piled it into housing. So, they bought bigger homes and bought regional homes and holiday homes and expanded and renovated and so, we've seen a bit of a housing boom.

Adam Stephen: And for some people that's been really good. We've seen some of our investors finally able to sell their properties for a return, that had been sitting on properties for a long time that hadn't been performing. A lot of these homes have gone into the owner occupier space though and it's resulted in a pretty horrendously tight rental market in regional Queensland. So we've got two things going on at the moment, if you own a home you've probably done reasonably well over the last couple of years. If you don't own a home, you're seeing your pay packet increasingly spent on rent. Is that a bad thing if it only worsens from here Shayne Elliott for the broader economy? Is it bad if rentals rise too much?

Shayne Elliott: It is bad, I think it's bad. I mean nobody wants to see the differences there between those who have homes and those that don't get too out of whack. What we've seen is, anybody who owned assets – and it wasn’t just housing, if you owned equities and had a super fund or any of those sorts of things – all of those things have gone up in value and extreme numbers, not just a little bit. Depending where you were, maybe your house went up 30 per cent.

It's pretty remarkable. And, of course those that didn't have a house have missed out, and now the prospect of owning that house or saving for a house has become even further away and forcing more people into renting for longer. Now what's supposed to happen here, of course, is those high prices are supposed to encourage the animal spirits of property developers and builders to get out there and build homes to meet that demand. The problem is at the moment because of what's happening in the world and things like Ukraine and all of these other terrible things, actually there's a shortage of good old basic things like timber. You just can't get homes built as fast as we would have liked. So it probably means we're in a bit of an extreme scenario for a little bit longer.

Adam Stephen: Now, you’re right, in traditional economic playbook, you see things peter out over time and the waves balance themselves out. But as you say, there are a few things going on at the moment that might not see that happen in the short term. However, we could see rising interest rates actually start to dampen down property prices. How do you see things playing out in terms of property prices over the next 12 months?

Shayne Elliott: Well, maybe we lost a bit of credibility here because we didn't get it right last time, but what we're seeing fundamentally is there's starting to be a little bit more normal markets, there is supply and buildings are coming online, there is a little bit more money going into the economy. So, we think housing will continue to rise but at a much, much lower rate, so maybe seven or eight per cent this year, but not the 20s and 30s that we've seen. But as I said, it can change very quickly and the one you’ve alluded to there is, what we don't know is what will happen to interest rates and the cost of borrowing. And I would say most people now would suggest, economists and banks and all those other people would suggest that we're somewhere the bottom. Rates are going to go up. What we don't know is when they're going to go up and how quickly they will go up.

Adam Stephen: We're hearing from Shayne Elliott, the CEO of one of the biggest banks in Australia, he's in Townsville for the first time and he's with us on ABC Radio across Regional Queensland. I do know that you'd have your strategists looking at everything, the best case scenarios the worst case scenarios and anywhere in between. Do any of the forecasts foresee a rapid reversal in property prices Shayne? And if so, what would have to materialise for that to occur?

Shayne Elliott: From our perspective, that would be an extremely unlikely event. You can never say never, but no, that doesn't even meet a downside case. That would be pretty extraordinary and in order for that to happen, you'd probably have to believe that interest rates - and again, this is not our predictions, I want to be really clear - you'd have to believe that interest rates went up a lot and really fast. And the reason none of us think that's going to happen is, the reason the Reserve Bank puts interest rates up is to slow down the economy and take money out of people's pockets, and because Australians today have a lot more debt in the form of home loans than they've ever had before, you don't need to put rates up very much to have that impact. But if there's a miscalculation for whatever reason and interest rates go up much faster than they need to, that would start to have an impact. But I think our Reserve Bank is pretty sensible. They've shown really good caution and they'll continue to look at the data.

Adam Stephen: We have seen this trend in Australia of our banks, including ANZ, closing branches in regional Australian towns. We're told this is inevitable as more people move to online banking. But does ANZ have a responsibility to continue to provide that bricks and mortar experience for those that aren't internet savvy where you can?

Shayne Elliott: Yes, we have a responsibility but it's all about balance and we need to get the balance right. Of course, we take into consideration what our customer activity is doing, and you're right, what we've seen is a massive reduction in the number of people going into branches, over the last two years. It's literally fallen by 50 or 60 per cent. And people understand, we're not a charity we do need to pay the bills and the rent and the cost of running branches and if nobody is in them, they become non-commercial. But we have a responsibility to make sure that banking is accessible. And what we see is that people can move on to things like phone banking, which is pretty much available right across the country or using their phone or internet, etc. and we’ve seen amazing take up of those things over time.

Adam Stephen: Well, it's been great to have you company this afternoon, Shayne Elliott. It's good to see you in Townsville, are you planning on getting up to other parts of regional Queensland? Is this engaging with the grassroots activity something you want to do more of?

Shayne Elliott: Absolutely we want to do more of it. This week though, we're trying to cover as much of the country as we can and we're off to Brisbane tonight. We've had two years of essentially being locked down ourselves and it was really important, we wanted to get back out. We're going to five places across the country. Townsville is number one. There were a lot of places we could have gone, we could've stayed at home, but we decided we wanted to get out and wanted to come to Townsville, wanted to hear the local stories and really understand the opportunity we see in northern Queensland. I have to say as I leave Townsville quite excited and positive about the diversity of the economy, the strength of the economy and the real opportunity ahead.

Adam Stephen: Great to have your company, and good to see north Queensland turned on some nice weather for you as well.

Adam Stephen: That was Shayne Elliott, the CEO of one of the big banks in Australia.