ANZ Australian Job Ads1 fell 2.8 per cent m/m in September, the third consecutive monthly decline, but was still 21.9 per cent higher than the pre-pandemic level. This is consistent with our expectation that the measured unemployment rate will only lift a little above 5 per cent later this year. 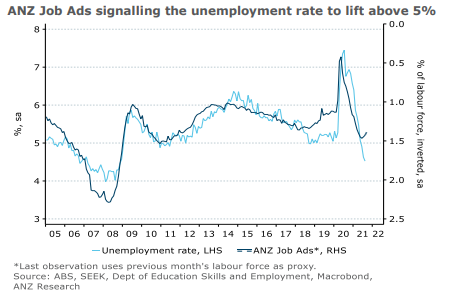 "ANZ Job Ads fell 2.8 per cent m/m in September as NSW, Victoria and the ACT remained in lockdown. But the cumulative decline of 6.8 per cent over the past three months is only a tenth the size of the 64.4 per cent plunge between February and May last year, during the national lockdown." ANZ Senior Economist, Catherine Birch said.

"So far, employment losses have been concentrated in NSW but employment is likely to fall heavily in Victoria in September. Again, the youngest workers and those in the lowest earning occupations are being hit hardest. ABS data show arts and recreation services and accommodation and food services recorded the largest employment and job vacancy declines between May and August. But the resilience in ANZ Job Ads and the latest ABS job vacancy data suggest that underlying labour demand is still robust, despite lockdowns. While job vacancies fell 9.8 per cent q/q in August, they remained significantly elevated, up 46.5 per cent compared with pre-pandemic."

"Nationally, the proportion of businesses reporting vacancies was still almost double what it was pre-pandemic. As NSW and Victoria progressively reopen through Q4, we expect ANZ Job Ads, employment and hours worked to rebound and underemployment to drop, in line with the recovery in labour demand and broader economic activity. But we think measured unemployment is unlikely to peak until after restrictions have eased, as it did last year."