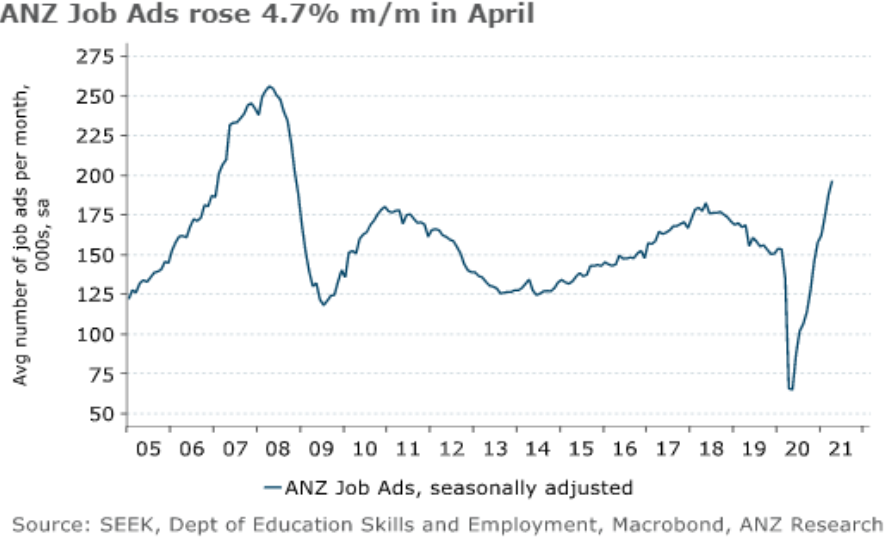 ANZ Job Ads has been a good indicator of the speed of the labour market recovery so far (Figures 1 and 2). It has risen for 11 months straight to be equivalent to 1.4% of the labour force (highest since late-2011), while the unemployment rate has dropped almost 2ppt since July 2020 to 5.6% in March. It is not surprising that ANZ Job Ads has continued to rise post-JobKeeper.

Businesses looking to hire new workers are, on the whole, unlikely to be those that were heavily dependent on the JobKeeper payment. We estimate 100,000-150,000 people will have lost or will lose employment in the months following the end of JobKeeper.

But we’ve also seen almost 160,000 additional people employed over the past two months. Strong labour demand should mean that many (but not all) will be able to find work elsewhere relatively quickly.

ANZ Job Ads is still signalling ongoing declines in the unemployment rate. In the May SoMP due on Friday, we think the RBA may upgrade its outlook to forecast an unemployment rate of around 5% by the end of this year. This would still be above the likely rate of full employment (NAIRU). While Treasury now estimates NAIRU at 4.5-5%, RBA Governor Lowe has said that he was sure it was below 5% and it was “entirely possible” that it could be in the 3s. So the unemployment rate may need to fall a lot further to generate enough wage growth and inflation.

But something that garners less attention is the influence of underemployment on wagesgrowth. In March, the under-employment rate fell below 8% for the first time since mid-2014, which was encouraging, but we think it will need to fall a lot further.