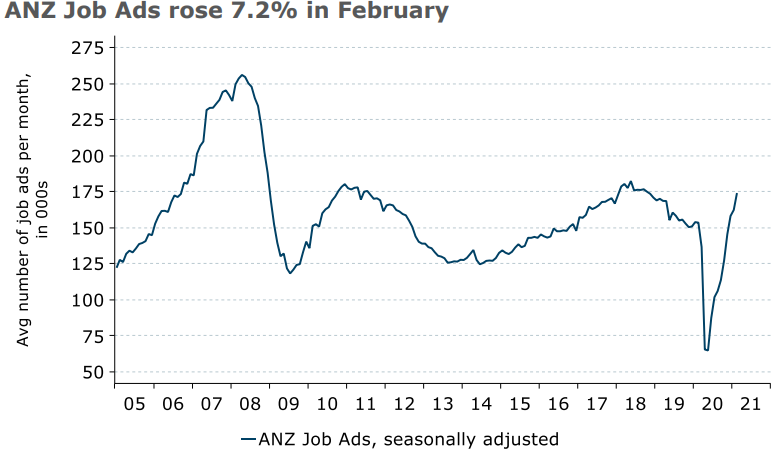 ANZ Job Ads growth accelerated out of the summer holidays, despite 5-day lockdowns in Western Australia and Victoria during February. Job Ads is now 13.4% above its pre-pandemic level, equivalent to an additional 20,500 jobs

being advertised on average per month.

The ongoing strength in ANZ Job Ads gives us confidence that we’ll see solid net employment gains continue over February and March at least and that the impact of the end of JobKeeper in March will be mitigated to some extent (Figure 2).

But we are still in the dark as to how many businesses and workers remain on JobKeeper in the current quarter, and therefore the potential hit to the labour market and overall economy. In December, the ATO reported there were more than 1.5 million workers still receiving the payment, equivalent to almost 12% of the workforce.

The task of bringing down underutilisation is still sizeable. In January, there were 878,000 people unemployed, 162,000 more than in March last year. 1.37 million remained on JobSeeker or Youth Allowance (other), with the payment to be reduced to $620.80/fortnight from 1 April.

Labour demand must carry on strengthening for unemployment and underemployment to continue their rapid fall. This will be necessary to drive wage growth above 3% (a feat not achieved in eight years) and inflation into