ANZ Australian Job Ads rose 7.4% m/m in March, following an upwardly-revised 8.8% m/m in February. ANZ Job Ads is now at the highest level since November 2008 and is pointing to further sharp declines in the unemployment rate (Figure 1 below). 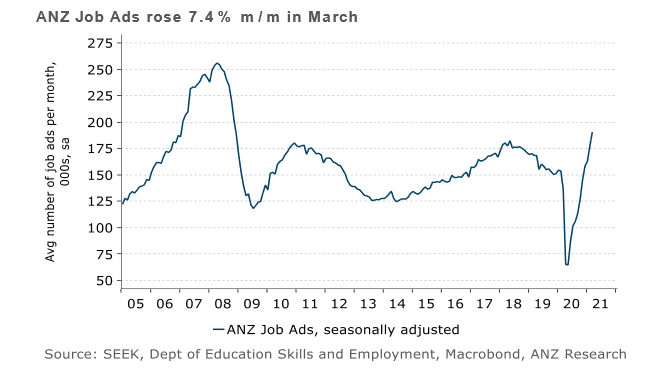 Six months ago, our view was that ANZ Job Ads would need to sustain levels materially higher than pre-pandemic in order to entrench the labour market recovery. ANZ Job Ads has done better than that, now 23% above its pre-COVID level and at a 12-year high. This strength has been reflected in the labour market, with employment close to a record high in February.

ABS job vacancies also increased a further 13.7% q/q in February, to be up 26.8% on the pre-pandemic level (Figure 3). This gives us further confidence that the impact of the end of JobKeeper will be smaller than previously feared.

Of the 1.1 million workers that Treasury estimates were still receiving the JobKeeper payment in Q1, we estimate that 100,000-150,000 people will lose employment, equivalent to 0.8-1.2% of the current workforce. But we think net employment losses will be smaller, as growing labour demand elsewhere should mean many workers find a new job relatively quickly. While we expect a temporary rise in the unemployment rate in Q2, we think it will resume its rapid downward trajectory in H2 2021.

Inevitably though, there will be some people who struggle to find work post-JobKeeper, ending up unemployed and on the lower JobSeeker payment. Workers in exposed industries, who may not have the skills or experience to work in other growing industries, low to middle income workers and young people will be most at risk.