ANZ Australian Job Ads rose 7.9 per cent m/m in May to be up 38.8 per cent on the prepandemic level. This points to continued rapid tightening in the labour market. 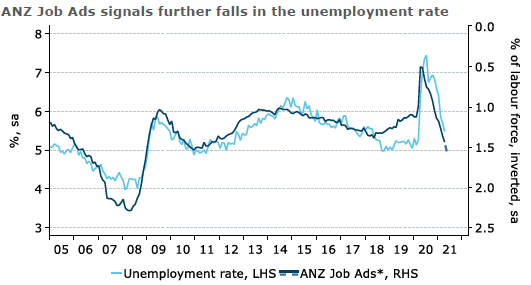 "ANZ Job Ads hit 12 straight months of gains in May, and is now consistent with an unemployment rate of around 5 per cent." ANZ Senior Economist, Catherine Birch said.

"In May, we upgraded our labour market forecasts, and now expect an unemployment rate of 4.8 per cent by the end of this year and 4.4 per cent by end-2022. We think solid employment growth will drive this rapid improvement, notwithstanding near-term volatility post-JobKeeper."

"The Victorian lockdown is unlikely to derail the state’s labour market recovery. Even if we see some employment losses in June, as long as restrictions start easing from 11 June as currently planned, workers should be reinstated or find new jobs quite quickly, given the underlying strength in the labour market."

"In addition to ANZ Job Ads, NAB’s employment index and capacity utilisation are signalling further solid employment gains, and the Westpac-Melbourne Institute’s Unemployment Expectations Index has fallen to a decade low. While the strength in ANZ Job Ads and ABS job vacancies is unlikely to fully translate into employment, due to skills mismatches and restricted labour mobility (both domestically and due to closed international borders), we still think employment growth will be very strong, particularly given such low population growth."

"Consequently, we expect both unemployment and underemployment to fall further. What is still uncertain is the strength of the transition from lower underutilisation to higher wages growth, and then to inflation. The Q1 Wage Price Index was slightly stronger than expected, annualising at 2.4 per cent. While still below the RBA’s 3 per cent yardstick, the gap is narrowing, which has implications for the timing and speed of RBA policy changes."