In seasonally adjusted terms, ANZ Job Advertisements fell 2.3% in December largely unwinding the increase over the previous two months. On an annual basis job ads are up 11.4%, a slight moderation from 12.0% y/y growth the previous month.

“The labour market in 2017 was characterised by widespread job growth (particularly in full time jobs), an increase in participation and a fall in the unemployment rate to a four-year low of 5.4%. Growth in ANZ Job Ads provided a leading signal of this strong performance.

As such, the fall in job ads in December might be a source of concern. There can be considerable volatility around this time of year, however. For this reason we are not unduly worried around the drop in December job ads. We note, for instance, that job ads fell nearly 2% in December 2016 without signalling a turn in labour market conditions. Having said this, the easing in the trend pace of job ads growth in the fourth quarter lends support to our view that we may see a slowing in employment growth over the coming months. We believe that, after 14 straight months of growth, employment has overshot the levels implied by job ads (Figure 3) and as such a period of moderation in jobs growth is likely.

Despite this our assessment of economic conditions suggests a continued improvement in labour market conditions over 2018, albeit at a slower pace. A slow but steady reduction in spare capacity should also eventually feed into wage growth, providing some support for consumers.” 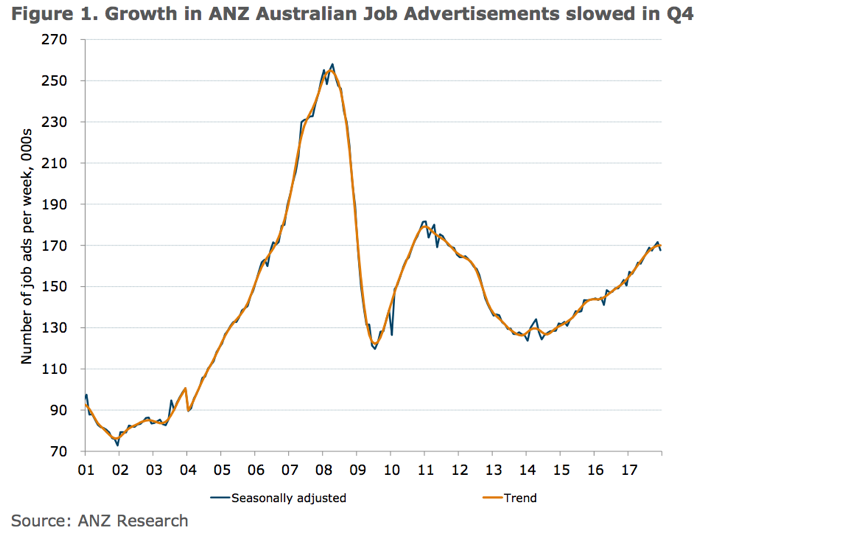