ANZ Job Advertisements rose 1.4% m/m in October, more than reversing the 0.7% decline previously. They now sit 12.5% higher than they did a year ago.

“The bounce in ANZ Australian Job Advertisements in October is consistent with elevated business conditions and capacity utilisation. The slight slowing in the month-on-month trend growth since August supports our view that employment growth is likely to moderate a touch after this extraordinary period of strength. We also note that the official employment data appears to overshot the level implied by ANZ Job Advertisements.

Even as the labour market strengthens, with the unemployment rate falling to a four-year low of 5.5% in September, solid growth in nominal wages continues to remain elusive. The experiences of other advanced economies that are at or close to levels of full employment suggest that global factors are keeping nominal wage growth low. Even so, we think it reasonable to expect some upward pressure on wages as the labour market tightens, given some evidence that sectors experiencing stronger labour demand have stronger growth in average weekly wages. As such, we find the fall in our monthly estimate of underemployment quite encouraging.

We will be closely watching the Q3 Wage Price Index, out next week, for any signs of improvement in underlying conditions, though this may be difficult to discern given the impact of the higher minimum wage.”

Note: There have been revisions back to 2013 that impact the level of job ads but not the month-to-month change. 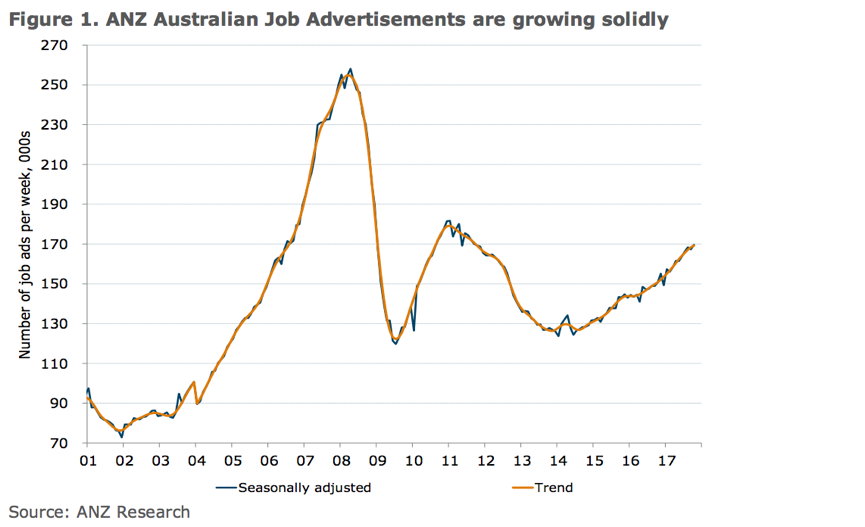