ANZ Job Advertisements continue to trend up, rising 1.5% m/m in July in seasonally adjusted terms. Total job ads are now up 6.5% since the beginning of the year. Annual growth picked up from 10.5% in June to 12.8% this month.


In trend terms Job Advertisements were up 1.0% m/m in July following a 1.3% rise in the previous month. The trend growth rate has averaged 1.1% m/m over the first seven months of the year, compared to 0.3% m/m over the same period a year ago.

“Recent data has shown a clear improvement in labour market conditions consistent with elevated business conditions, profitability and capacity utilisation. In particular, the strength in full-time employment and a solid increase in hours worked (near 3.3% y/y) are quite encouraging. Among other things we think this strength has contributed to the lift in consumer confidence from its recent low point in April.

That said, several challenges remain and we expect the pace of improvement to moderate over the medium term. First, the level of underutilisation remains high and business surveys suggest that it is likely to fall only gradually. Second, the drivers of growth over the next few years look to be less labour intensive given the slowdown in housing construction and the expected contribution of labour-lite LNG exports to growth. We also don’t expect the recent strong pace of public sector jobs growth to continue. Lastly, despite the improvement in labour conditions, wage growth is sluggish and is expected to remain so.

Broadly, forward indicators and survey based measures point towards near-term jobs growth in the order of 15-20k per month. Given the importance of the labour market and wage growth to the course of monetary policy, we will be closely watching the Q2 Wage Price Index number, out on August 16.” 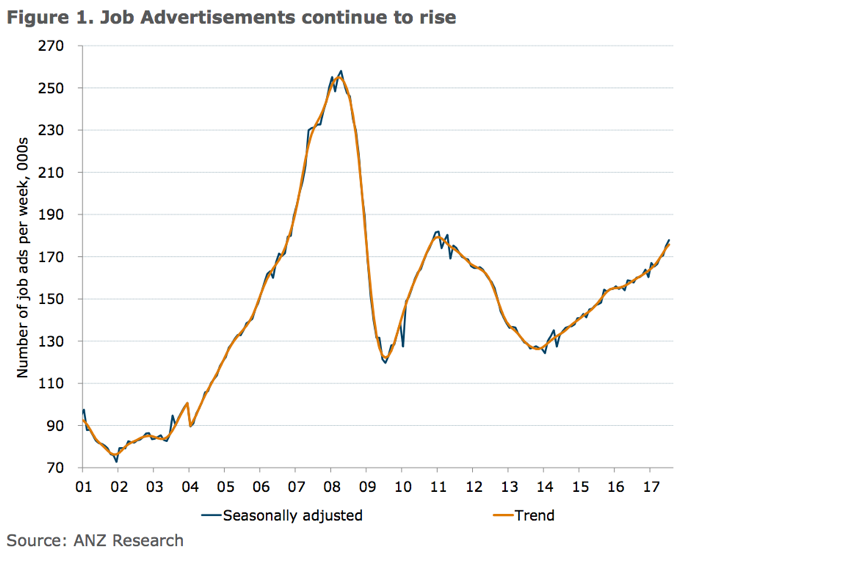