ANZ Job Advertisements rose a solid 2.7% m/m in June in seasonally adjusted terms, following a modest 0.4% rise the previous month. Job ads have risen 4.9% since the start of 2017. Annual growth jumped from 7.4% last month to 10.5% in June.


In trend terms Job Advertisements were up 1.0% m/m in June. The trend growth rate has averaged 0.9% m/m over the first six months of the year, compared to 0.3% m/m over the same period a year ago.

“Business conditions, profitability and capacity utilisation have been rising or sitting at elevated levels for the better part of a year. The strength of ANZ Job Ads over the first half of 2017 indicates this is translating into a positive outlook for the labour market.

A feature of the recent data in Australia has been the strength of employment. According to the official labour force data, some 140,000 jobs have been created over the three months to May – with the unemployment rate dropping to 5.5%. We think there is a strong element of catch-up in these data, with employment outcomes prior to these three months looking far too weak given indicators such as the ANZ Job Ads survey.

The gap between the official data and ANZ Job Ads has now largely closed, which suggests that the pace of job gains over coming months should be closer to what we think is the true trend level of 15-20,000 jobs per month rather than the outsized gains seen recently. The continued gain in job ads points to this trend being maintained.

We think the strength of employment will be a key factor in stabilising, and possibly lifting, consumer sentiment. This will be important in ensuring the downside risks to the economy don’t materialise.

The ongoing strength of the labour market allows the RBA to effectively disregard the weakness of GDP growth in the first half of this year when it reviews its forecasts for the August Statement of Monetary Policy.” 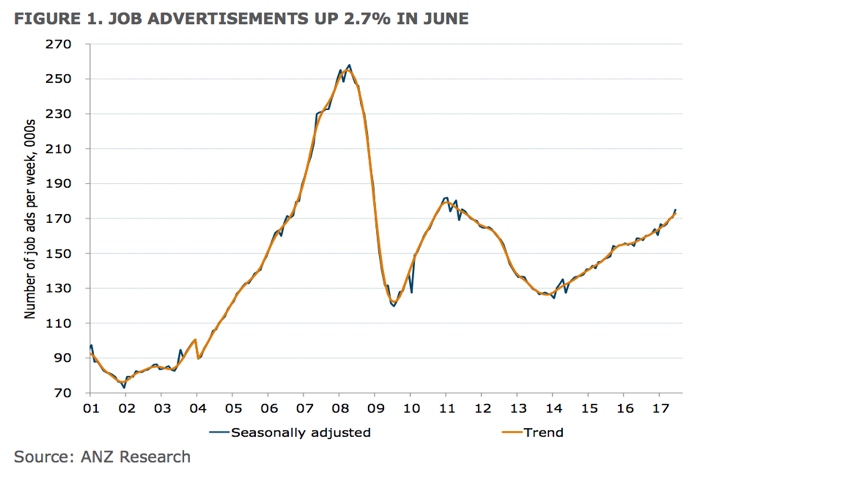