ANZ Job Advertisements ticked up a modest 0.4% m/m in May in seasonally adjusted terms, following a solid 1.5% rise the previous month. The m/m rise has averaged 1.2% since the start of the year, compared to 0.4% m/m over the same period last year. Annual growth eased from 10.1% last month to 7.4% in May.

“The strong rise in employment in April along with the drop in the unemployment rate to 5.7% was consistent with the strength in ANZ Job Advertisements since the start of the year. Despite the moderation in May, Job Advertisements indicate that employment growth is likely to continue over the coming months. The good news on the employment outlook contrasts with what is shaping up as a weak Q1 GDP report later this week. We think the outlook for the labour market will be critical for the path taken by monetary policy over the next six months. If the labour market falters then the prospect of further RBA easing will increase significantly.

In our view the unemployment rate is likely to edge downwards over the rest of the year, as official data catches up and matches the forward looking indicators. That being said, risks remain. In particular, given the level of spare capacity in the labour market, it is possible that additional demand for labour may be met by increasing the hours of part-time workers, which could keep the unemployment rate from falling.

Moreover, spare capacity is expected to continue to weigh on wage growth over the next year, consistent with comments from the RBA’s liaison program and our own ANZ Wage Gauge. This in turn, is likely to have implications for consumption growth given the high levels of household debt and expected moderation in house price growth.

Overall, labour market conditions have improved since the latter half of 2016, and we expect this to continue over the coming months.” 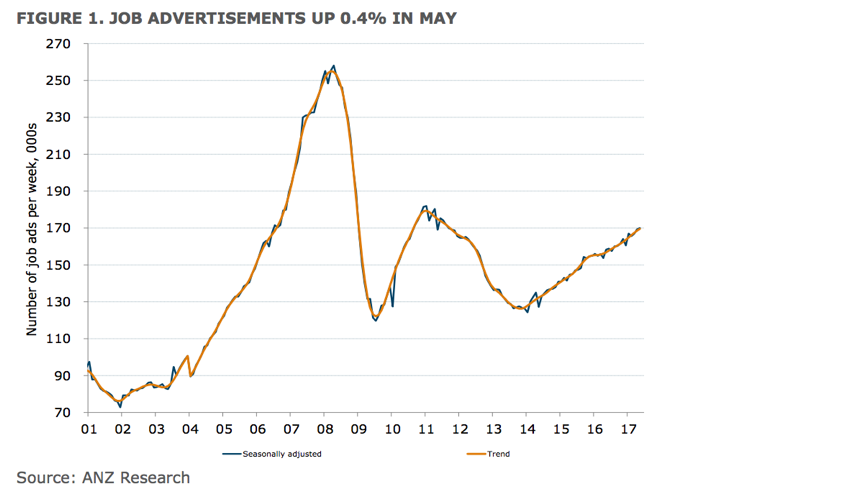