The agreement will see COSCO and Sino-Poland Enterprise each acquire 10% of SRCB for a total consideration to ANZ of RMB9,190 million (A$1,838 million). The sale price represents a price-to-book ratio of approximately 1.1 times SRCB’s net assets as at December 2015*.

ANZ’s relationship with SRCB has been a successful financial and commercial transaction since the investment was made in September 2007.

ANZ Deputy Chief Executive Officer Graham Hodges said: “This partnership has been beneficial for both ANZ and for Shanghai Rural Commercial Bank. SRCB is now a strong, successful bank with a prosperous future.

“As we have previously stated, the sale reflects our strategy to simplify our business and improve capital efficiency.

“The sale will also allow us to focus our resources on our Institutional Banking business in Asia. This includes a significant commitment to China over the past 30 years with 100% ANZ-owned branches in Beijing, Shanghai, Guangzhou, Chongqing, Chengdu, Hangzhou and Qingdao serving our institutional clients," Mr Hodges said.

After transaction costs and taxes, the sale price is broadly in line with the carrying value of the investment in ANZ’s accounts as at 30 September 2016. This includes accumulated equity accounted profits and foreign currency translation reserves over the period of investment. However, if completion occurs after the end of the first half of the 2017 financial year, accounting timing differences will result in a negative impact to net profit after tax in the first half, and a largely offsetting positive impact at completion.

The sale, agreed on 31 December 2016, is subject to customary closing conditions and regulatory approvals and is expected to be completed by mid-2017.

Summary of ANZ Investment in SRCB and Financial Return 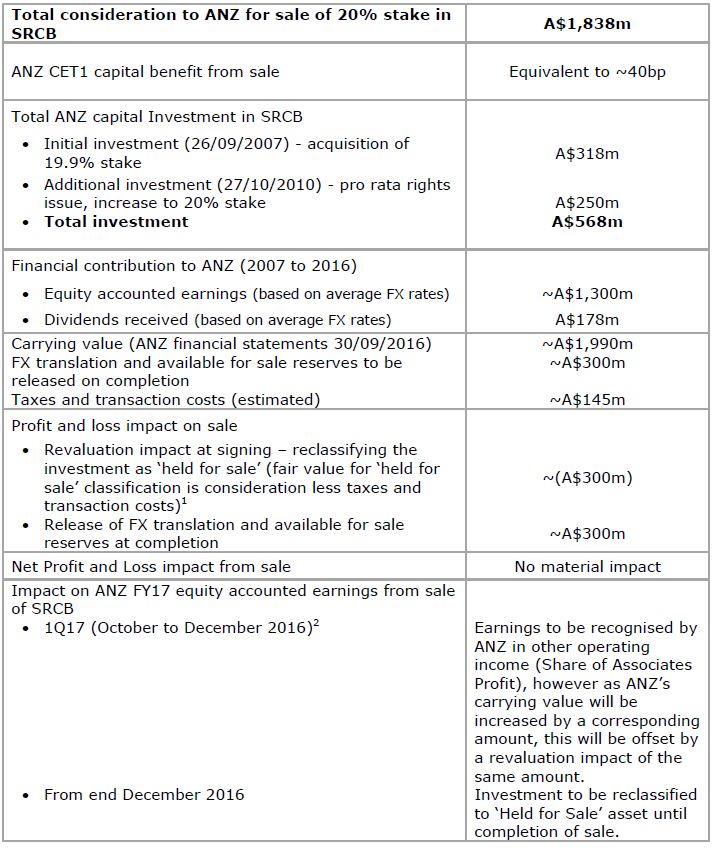 * Based on SRCB’s most recent audited accounts for the year ended 31 December 2015.

1. Final revaluation impact to be determined by end December 2016 carrying value, including impact of 1Q17 equity accounted earnings. Net profit after tax will increase by the amount of any equity accounted earnings to 31 December 2016, and the carrying value will increase by a corresponding amount, resulting in a revaluation impact of the same amount.

Note: AUD financial information is based on FX rates at the time of announcement of each event unless otherwise stated.