The FY16 result reflects a good performance in ANZ’s core domestic franchises and significant reshaping of the business driven by ANZ’s strategic focus to create a simpler, better capitalised and more balanced bank that produces better outcomes for customers and shareholders.

The result reflects an emphasis on delivering strong capital and cost management outcomes together with $1,077 million of charges (after tax) for Specified Items primarily related to reshaping the Group to position it for improved performance in future years.

Adjusted Pro-Forma Cash Profit2 was $7.0 billion down 3%, while Profit before Provisions increased 6% as the benefits of simplification and rebalancing initiatives began to emerge. Return on equity was stable in the second half of the financial year at 12.2% (adjusted Pro-forma Cash Profit basis).

ANZ Chief Executive Officer Shayne Elliott said: “This year we delivered another good performance in Australia and New Zealand with our consumer and small business franchises producing strong results based on a disciplined approach to market share and tight cost management.

“We also took steps to create a better experience for our customers and to compete efficiently in the digital age. This included the successful launch of Apple Pay and Android Pay in Australia and Apple Pay in New Zealand. These are market-leading initiatives that have delivered good growth in new to bank customers.

“In Institutional Banking there has also been significant progress in improving returns and building a simpler business focussed on regional trade and capital flows. This included a meaningful reduction in low yielding assets and improved productivity.

“We are also making changes to ensure we are fairer and more balanced in the way we deal with customers and to demonstrate our commitment to community responsibility. The current discussion about the banking sector in Australia however shows that we still have more to do to shift our culture and evolve the way we do business,” he said. 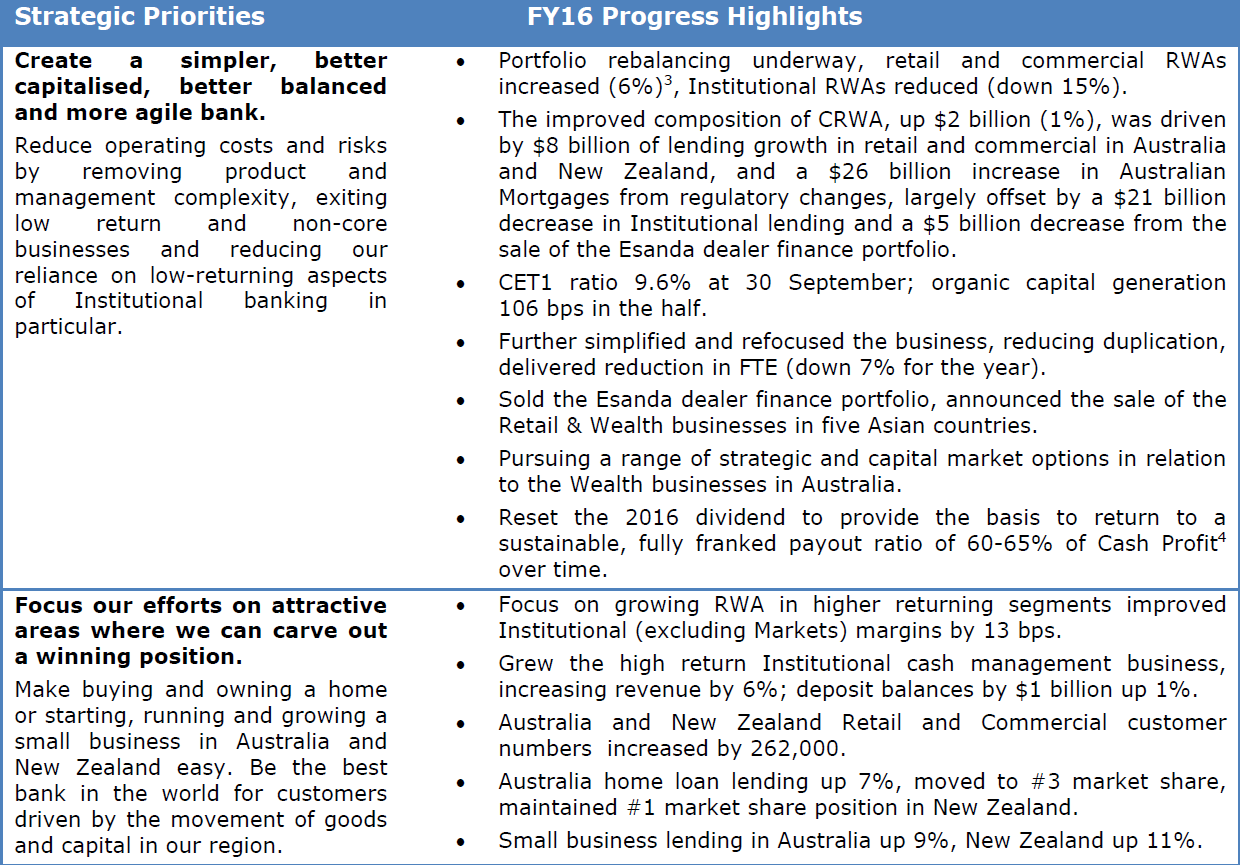 At the 2016 Interim Result, ANZ advised that it was conducting strategic reviews of the Group’s Retail and Wealth business in Asia, and its Wealth businesses in Australia and New Zealand. The reviews considered each business within the context of the overall Group strategy including capital efficiency.

The strategic review of ANZ’s Wealth businesses in Australia and New Zealand concluded that while the distribution of high quality Wealth products and services should remain a core component of the Group’s overall customer proposition, ANZ does not need to be a manufacturer of Life and Investments products.

The initial focus will be on the Australian Wealth business where ANZ is exploring a range of possible strategic and capital market options that will maintain strong outcomes for customers. This includes the possible sale of the life insurance, advice and superannuation and investments businesses in Australia. ANZ will pursue a disciplined approach to this process and will update the market as appropriate.

The Wealth business in New Zealand will be considered separately during 2017.

The APRA CET1 capital ratio at 30 September was 9.6% (14.5% on an Internationally Comparable basis). Organic capital generation of 106 basis points in the second half was 33 basis points higher than the second half average of the past 4 years, primarily driven by Credit RWA reduction (excluding foreign exchange impacts) of $12 billion in the Institutional business.

ANZ is gradually consolidating to its historical payout range of 60-65% of annual Cash Profit which ANZ believes provides a more sustainable base reflecting the greater demands for capital arising from increased regulatory requirements. On an Adjusted Pro-forma Cash Profit basis the Dividend Payout Ratio was 67.1%.

In FY16 ANZ recognised the impact of a number of items collectively referred to as Specified Itemswhich form part of the Group’s Cash Profit. The items are primarily related to initiatives undertaken to reposition the Group for stronger profit before provisions growth in the future. Adjusted Pro-Forma Cash Profit information has also been provided to allow the market to better analyse the ongoing operations of the Group.

ANZ recorded $1,077 million (after tax) of specified items charges in Cash Profit during the Financial Year, of which almost half ($522 million) related to a change in the application of the software capitalisation policy. This change in policy effected a 24% reduction in the Capitalised Software balance year on year.

One third of the Specified Items charges occurred in the second half, including an additional restructuring charge of $100 million (post tax) and a derivative credit valuation adjustment (CVA) of $168 million (after tax).

The restructuring charge supports the evolution of the Group’s strategy and will underpin further productivity through reshaping of the workforce to reduce complexity and duplication, and to align with the changing emphasis in Institutional. ANZ has refined the methodology for the calculation of CVA, a component of valuing derivative instruments in the Markets business. The updated methodology makes greater use of market credit information and more sophisticated exposure modelling and is in line with

A more detailed information pack on specified items is on www.anz.com within the FY16 results materials.

While in aggregate the credit environment is broadly stable, pockets of weakness continue to work their way through the economy, largely reflecting stress moving through the resources and resources related sectors. The stress appears to have now largely passed through the Institutional market and is progressively moving through the Commercial and Retail sectors. ANZ therefore expects provision charges to remain broadly the same in the 2017 Financial Year as a percentage of gross lending assets.

Commenting on the outlook Mr Elliott said: “We are pleased with the initial progress that has been made this year in reshaping our strategy and setting ANZ on a path towards a sustainable improvement in customer outcomes and shareholder returns.

“We have a clear strategy and a consistent focus on the simplification of our business and actively rebalancing our portfolio. Importantly we have the organisation aligned and we have established momentum in relation to the work that still needs to be done. This sets us up well to increase the pace of execution in 2017 and to deliver a better bank for customers and for shareholders,” he said.

1. Cash Profit excludes non-core items included in Statutory Profit and is provided to assist readers in understanding the results of the ongoing business activities of the Group. The net after tax adjustment was an addition to Statutory Profit of $130 million comprised of several items. All comparisons are to the full year end September 2015 unless otherwise noted.

3. Excludes the impact of increased capital requirements for Australian residential mortgages from July 2016 and the divestment of Esanda Dealer Finance.