ANZ today announced a statutory profit after tax for the half year ended 31 March 2016 of $2.7 billion down 22% and a cash profit2 of $2.8 billion down 24%, following a $717 million net charge primarily related to initiatives to reposition the Group for stronger profit before provisions growth in the future.

Excluding these Specified Items (see page 3), allowing for better comparison with previous periods, adjusted pro-forma cash profit3 was $3.5 billion down 4% and profit before provisions was up 5%.

The result reflects a strong performance in ANZ’s Australian and New Zealand consumer and small business franchises and challenging market conditions in Institutional Banking including higher provisions in the resources sector and in related industries.

Significant progress was also made in streamlining and simplifying ANZ to ensure the bank is future ready. This included a particularly strong expense management outcome, improved capital efficiency and initiatives to accelerate momentum and deliver future benefits including a restructuring charge and a change to the application of accounting policy to accelerate software amortisation. ANZ Chief Executive Officer Shayne Elliott said: “This result reflects a challenging period for banking and we have taken the opportunity to move decisively and adapt to the changing environment by building a simpler, better capitalised and more balanced bank.

“We have strong underlying drivers in our Australia and New Zealand consumer and small business franchise and we have seen good early progress in transforming Institutional Banking. This has been supported by prudent capital management and tight control of costs with total expenses, excluding the impact of Specified Items, being lower for the first time in seven halves.

“Banking is however continuing to experience rapid shifts in technology, customer expectations and regulation against a backdrop of low economic growth, volatile financial markets and rising credit costs. Our priority is to take bold action to ensure ANZ is fit and ready for this future.

“This means for the immediate future we are in a period of consolidation, simplification and transition. We have a clear plan and we have made significant progress this half through a focus on four strategic priorities,” Mr Elliott said. 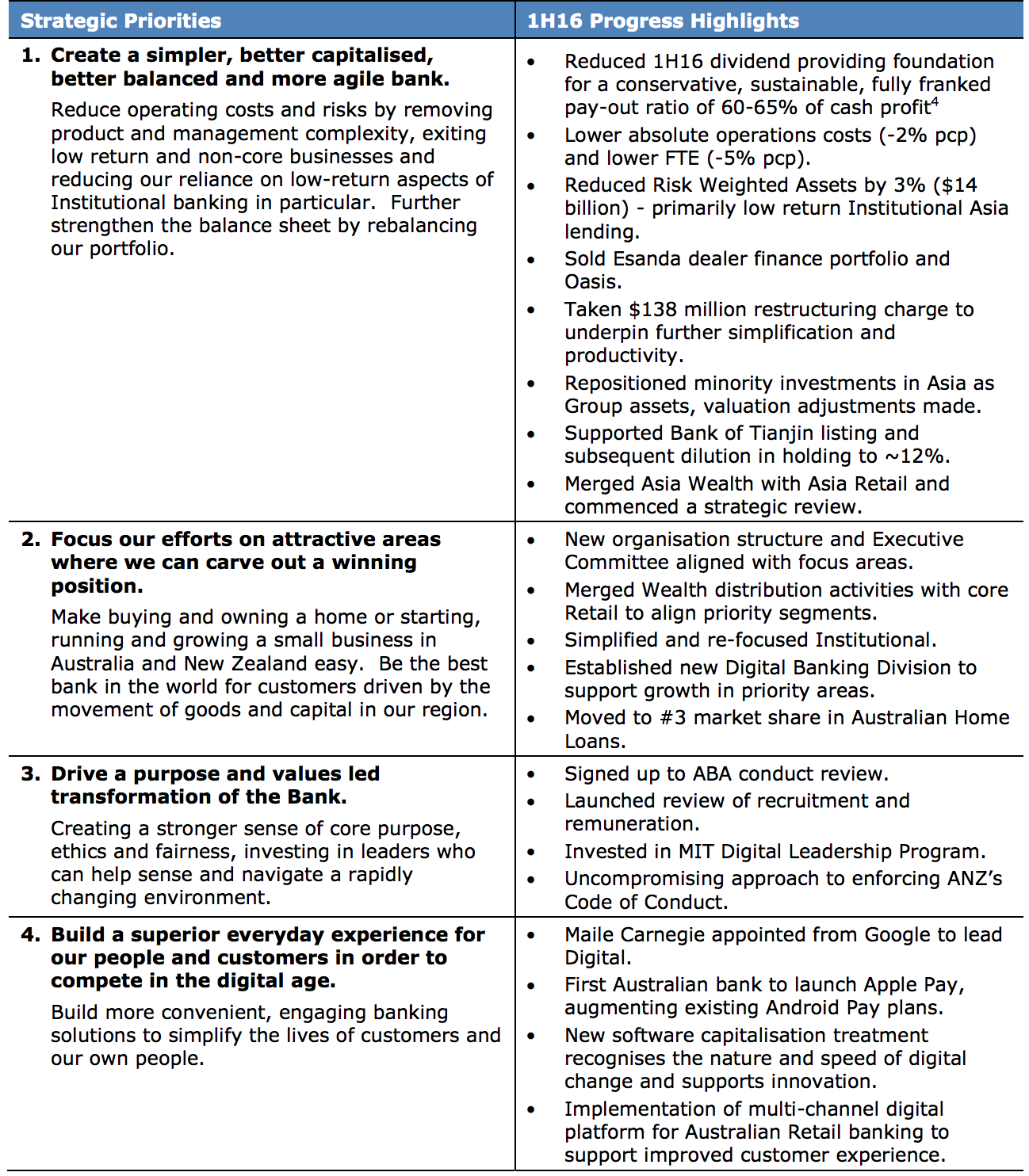 Capital and Dividend. The actions being taken to simplify the business, rebalance our portfolio, divest non-core assets and increase capital efficiency in the Institutional loan book assisted the Group to generate 76 basis points of capital during the half. Further benefits are expected in future periods.

The Interim Dividend is 7% lower than the prior comparable period 1H15, reflecting actions undertaken to reshape ANZ and a normalisation of the credit cycle. The dividend payout ratio during the half of 84% primarily reflects the impact of specified items. On an adjusted pro-forma basis the ratio is 67%.

Consistent with ANZ’s normal practice, it is expected the Final Dividend for FY16 will be at least the same as the Interim Dividend in cents per share terms.

ANZ recognises the stability of the Group’s payout ratio and ability to fully frank dividends are critical considerations for shareholders. Following a period of dividend payout ratio expansion in the Australian banking sector, ANZ will gradually consolidate to its historic range of 60-65% of annual cash profit. This setting better reflects the changed banking environment in which we operate and the greater demands for capital.

Specified Items. During the half the Group sold the Esanda Dealer Finance portfolio and also recognised the impact of a number of items collectively referred to as ‘Specified Items’ which form part of the Group’s cash profit.

These specified items are (on an after tax basis): an accounting change to the application of the Group’s software capitalisation policy ($441 million), impairment of the Group’s investment in AmBank ($260 million), a net gain in relation to Bank of Tianjin ($29 million) and Group restructuring expenses ($101 million), as well as the Esanda dealer finance sale ($56 million). An information pack on these changes is on anz.com within the 1H16 results materials.

ANZ, by lifting the software capitalisation threshold and directly expensing more project related costs, has introduced a greater level of discipline into the management of technology investment. The change, effective from 1 October 2015, of itself does not impact the Group’s total spend on technology but better aligns the application of ANZ’s policy with the rapidly changing technology landscape, increased pace of innovation in financial services and the Group’s own evolving digital strategy. These changes bring forward the recognition of software expense resulting in lower amortisation charges in future years.

A restructuring charge of $138 million (pre-tax) was recognised in the half which will underpin further productivity in the second half and future years, through reducing complexity and aligning the Group to the changing emphasis on Institutional and International businesses.

While the overall credit environment remains broadly stable, ANZ has continued to see pockets of weakness associated with low commodity prices in the resources sector and in related industries. Increased provision charges in the first half include charges related to a small number of Australian and multi-national resources related exposures.