“The positive trend in job advertising is a sign that the economy is so far adjusting relatively well to significant headwinds from falling commodity prices and mining investment.

While non-mining firms remain fairly reticent to increase capital spending, the demand for labour in a range of services industries has strengthened. Activity in these industries has been supported by the sharp depreciation of the Australian dollar, which has redirected spending back towards the domestic economy, and by low interest rates, particularly through robust housing market activity and its flow on effects. Hiring in the services sector also looks to have displayed some ‘catch up’ over the past year or so following unusually weak outcomes.

While we expect momentum in non-mining activity to remain quite good in the near-term, our view is that the significant support to growth from the factors above will wane heading into 2016. For this reason, we expect employment growth to remain reasonably healthy over the remainder of 2015 but to then soften next year. This is likely to prompt the Reserve Bank to provide a little more monetary policy support to prevent the unemployment rate from rising further.” 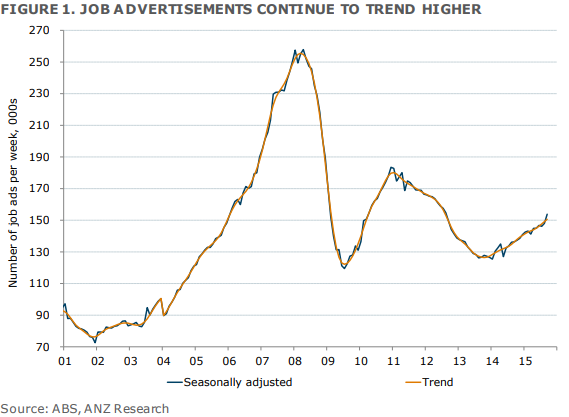