ANZ today announced that it intends to issue ANZ Capital Notes 3 to raise A$750 million with the ability to increase or decrease the size of the offer.

The offer is expected to open on 5 February 2015 and forms part of ANZ’s ongoing capital management strategy. ANZ will use the proceeds of the offer for general corporate purposes.

See below for the key features of ANZ Capital Notes 3. 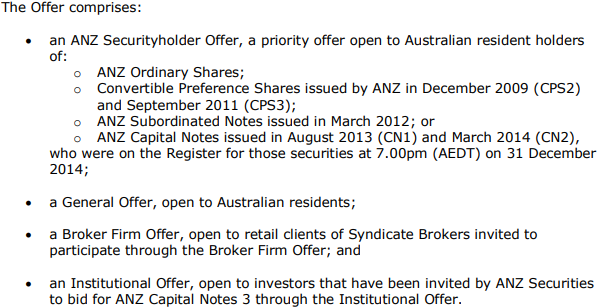 Shareholder approval is not required for the issue of ANZ Capital Notes 3.

The ANZ Capital Notes 3 Prospectus, attached to this release, has been lodged with ASIC and is available within Australia at www.anz.com/capitalnotes3 or by calling the ANZ Information Line on 1800 113 399 (Australia) or +61 3 9415 4010 (international). A replacement Prospectus, containing the Margin and Application Forms, will be made available when the Offer opens.

Investors will need to consider the Prospectus in deciding whether to apply for ANZ Capital Notes 3. Applications may only be made using the Application Form attached to or accompanying the replacement Prospectus.

Capitalised terms in this release have the meaning given to them in the Prospectus.

NOT FOR RELEASE, PUBLICATION OR DISTRIBUTION IN WHOLE OR IN PART IN OR INTO THE U.S. This statement does not constitute an offer of any securities for sale. The securities offered will not be registered under the U.S. Securities Act of 1933 and may not be offered or sold in the United States absent registration or an applicable exemption from the registration requirements. 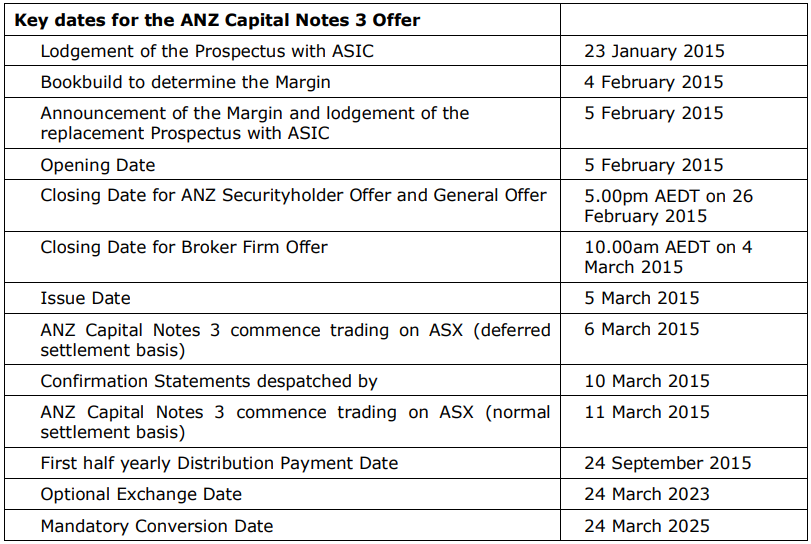 The key dates and times for the Offer are indicative only and may change without notice.